by Today and Tomorrow
in Archbishop's Gala, Article, Scholarship
Comments 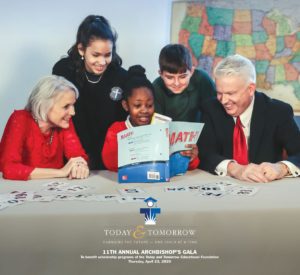 When it comes to elementary education planning, the best thing a family can have is a choice. Every parent wants the opportunity to choose the best school for their child– but they also need the ability to afford that choice. Today and Tomorrow Educational Foundation (TTEF) provides scholarships that make private or faith-based education a choice for economically disadvantaged families.

Founded in 1991 in response to both increasing cost and declining enrollment for Catholic schools in the metro area, the foundation serves families of all faiths looking for tuition assistance in Catholic and non-Catholic schools.

“The founders wanted to do something for kids who wanted to attend non-public school but couldn’t afford it,” explains Kevin Short, board chairman for the foundation.

TTEF provides tuition assistance through need-based scholarships to more than 120 elementary schools in the region. Families can apply at any point in their child’s education, whether they’re just starting to look at schools, have found their top choice, or already have a child enrolled in school.

“This program helps attract students and also helps these schools retain students that might not be able to stay enrolled due to financial reasons,” says executive director Sharon Gerken, adding that the foundation focuses on elementary schools in the region thereby investing in the foundational years of a child’s education.

Today, nearly 30 years since its founding, the programs provided by TTEF serve more than 1,500 participants in St. Louis city and more than 3,000 in the greater metro area annually. “In the last 10 years, we’ve grown from distributing $500,000 in scholarships annually to become a $12 million dollar organization. Since its inception, TTEF has distributed in excess of $125 million in scholarships,” says board member Greg Twardowski. “We award about $2,000 per student. It’s pretty spectacular for the families.”

“We’re looking at the next iteration,” Gerken adds, having led the work of TTEF for the last 13 years. “There’s plenty of need out there; it’s a matter of how we want to move forward and focus our resources.”

On April 23, TTEF will be hosting their 11th Annual Archbishop’s Gala, a fundraiser that serves as a celebration of the organization and its accomplishments. “Eleven years ago Archbishop Robert J. Carlson wholeheartedly embraced the idea of an annual gala to benefit TTEF scholarship programs,” Short says. “To date, we’ve raised nearly $7 million dollars from the gala alone, providing thousands of elementary school scholarships for children in need.”

“It’s really an opportunity to highlight recipients and their families and thank our donors,” Gerken expresses. “It may be the archbishop’s last gala and will be a great chance to thank him for his commitment.”

The evening will include a keynote speech from the archbishop. The Sister Mary Ann Eckhoff Leadership Award will also be presented posthumously to TTEF board member of 16 years and St. Patrick’s Center founder Edith Cunnane, who passed away in early 2020.

Twardowski adds that the fundraiser also serves to raise awareness. “We’re very successful, but we can use all the help we can get,” he says. “We want to be able to support more children and give more great choices to families, not just for faith-based education but elementary education in general.”

Scholarships through TTEF have changed the lives of thousands of students and families, such as TTEF scholars Luke Stoff, Yareli Martinez, and Danielle Adory, who are currently receiving scholarships to attend St. Roch School, St. Cecilia School and Academy, and St. Frances Cabrini Academy, respectively. These three scholars say that TTEF not only helped their families financially but also provided the comfort of knowing that an organization was investing in them and their futures.

“Education is the single greatest predictor of a child’s success,” Gerken says. “We need to do our part to help kids read and write so that they can become productive members of society; our future is dependent on them.” The foundation’s website has information on how to reach out and make a donation and invest in the future of children like these scholars.

“Education is a gift and that gift is about hope and opportunity,” Twardowski says. “Every family should have the choice of a private or faith-based education, and TTEF provides that choice.”